Cats are finicky creatures with moods that can quickly change from happy to upset. The ability to see when your cat is angry will allow you to understand when to back off and give your cat space instead of escalating the situation. Continuing to prod a cat who is angry is not only disrespectful, it’s also dangerous. A cat who is exhibiting any of these 6 signs is prepared to strike. Here are 6 signs your cat is angry: 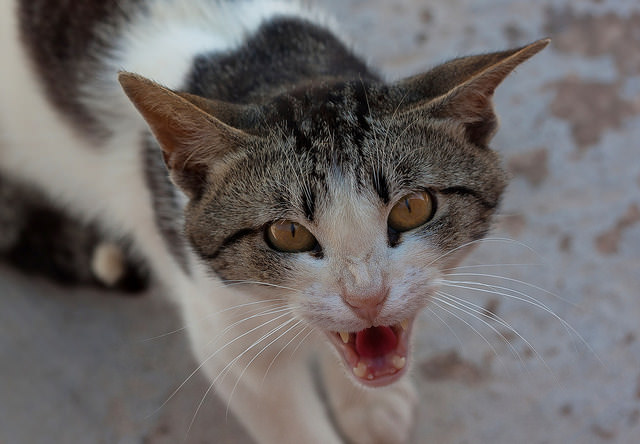 Give your cat space if she is hissing, growling, spitting, or emitting a guttural moan. These sounds are the closest your cat can get to saying “Hey, back off!”

Cat tails are very expressive, but in a way that is often subtle. A tail that’s flickering back and forth quickly or held low can indicate an irritated cat. The hair may also stand up on an angry cat’s tail.

Dilated or constricted pupils can both indicate anger. Eye signals can be exceptionally hard to read because your cat’s eyes can be affected by so many factors. For instance, the amount your cat’s pupils are dilated can help determine if your cat is angry, but her eyes can also dilate to adjust to the amount of light in the room. Take note of her eyes, but use the information in conjunction with other clues, such as ear signals and vocalizations. 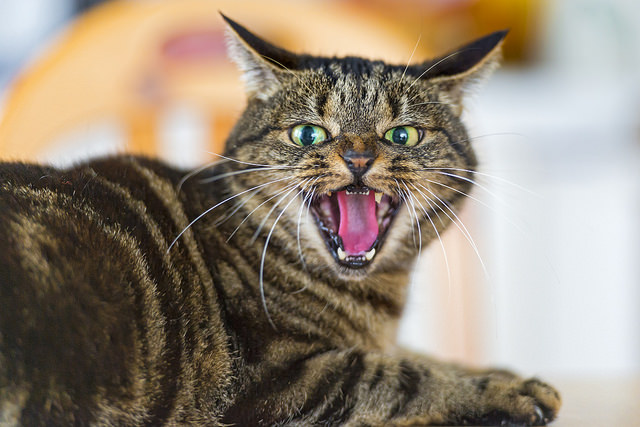 An angry cat’s ears will lay flat, either towards the side or back of her head. 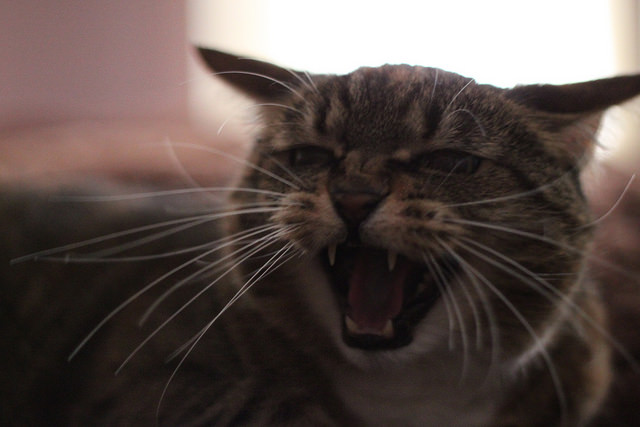 You can gather a good amount of information by observing your cat’s stance. An angry cat will often display an arched back with fur standing on end (an attempt to look as big as possible), or a body that’s hunched close to the ground (ready to strike).

If your cat swats at you when you try to pet her, respect it as a clear signal that she doesn’t want to be touched.

Jayne started out as a veterinary nurse before she had her son, Joshua, and later her daughter Lily. Jayne is a passionate cat lover and has two fur-babies in Max and Silky. She admits to have a particular soft spot for russian blue cats and says she does her best not to make Max jealous when she pays special attention to Silky her russian blue. While Jayne was on maternity leave she noticed it wasn't easy to find the information she wanted about her beloved animal so she decided to start Cat Informer!